Taking care of your child’s teeth and gums is important. Healthy mouth and teeth are an important part of a child’s overall wellness. Speech, the ability to concentrate and learn, nutrition and self-esteem are directly tied to the condition of the mouth. Untreated tooth decay in children and teens can cause pain and infections that may lead to problems with eating, speaking, playing, and learning. Tooth decay is one of the most common diseases affecting children and teens. It is more common than hay fever or asthma.

According to the Center for Disease Control (CDC):

Ask your medical or dental provider about other preventive interventions including: 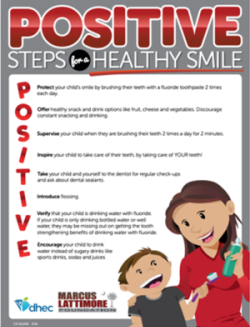 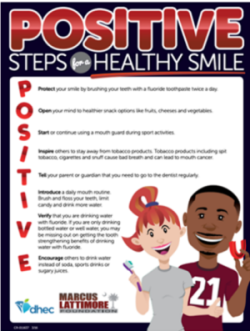 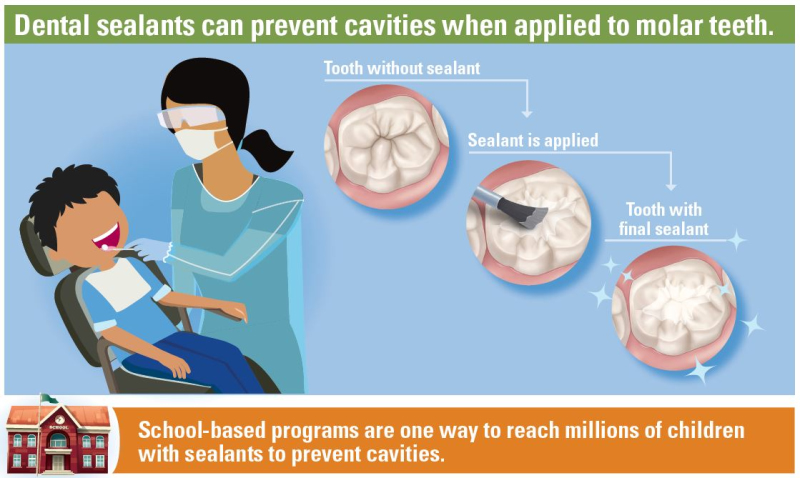 According to the CDC, “Dental sealants are thin coatings that when painted on the chewing surfaces of the back teeth (molars) can prevent cavities (tooth decay) for many years. Sealants protect the chewing surfaces from cavities by covering them with a protective shield that blocks out germs and food. Once applied, sealants protect against 80% of cavities for 2 years and continue to protect against 50% of cavities for up to 4 years.” The South Carolina State average for children assessed with a sealant present is 27.17%. 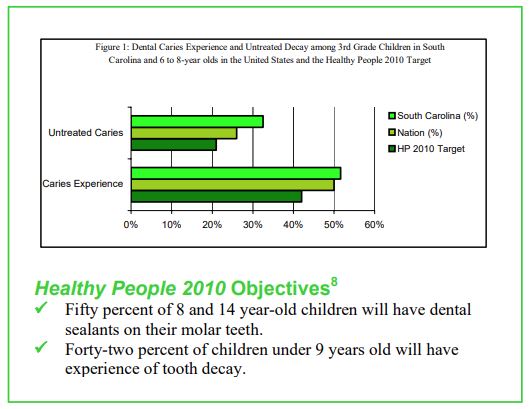 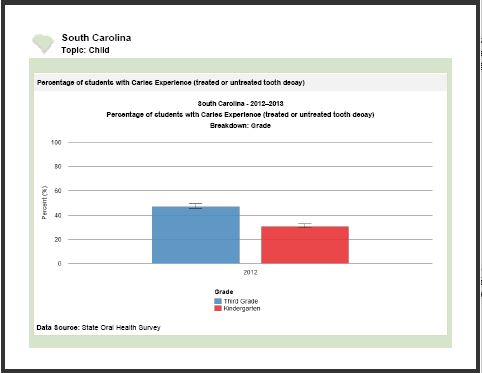 Did you know that South Carolina Healthy Connections Medicaid covers some dental care services for adults and children, one of them being dental sealants among others?

Typically, children should get sealants on their permanent molars as soon as these teeth come in. In this way, the dental sealants can protect the teeth through the cavity-prone years of ages 6 to 14. Here is a condensed list of where to get dental sealant services: 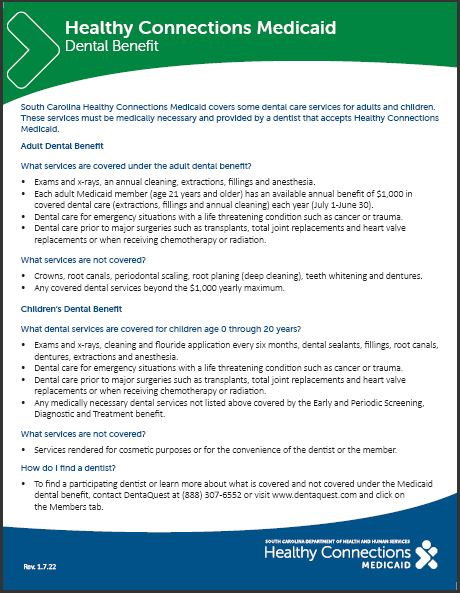 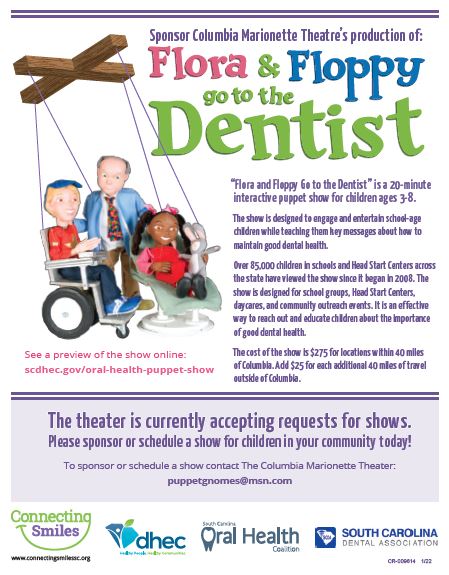 Flyer for schools and sponsorship information 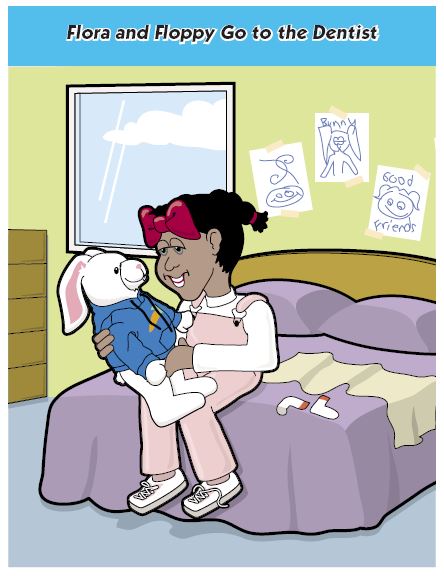 “Flora and Floppy go to the Dentist” is a 20-minute interactive puppet show for children ages 3-8. This unique initiative was created as a result of an American Dental Association (ADA) grant that funded the theater to create a traveling puppet show.

The show debuted in the fall of 2008 to over 300 kids at a “Back to School Bash held at the S.C. State Fairgrounds. As of 2021, the show has been seen by more than 85,000 children at schools and Head Start Centers across the state.

“According to the 2018 Oral Health Needs Assessment (OHNA), 40.5 percent of South Carolina children in kindergarten and third grade have experienced tooth decay,” said Raymond Lala, director of DHEC’s Division of Oral Health. “The show is a great way to reach children across the state with oral health messages while they are being entertained. The value of this approach is that children learn key concepts about taking care of their mouths and teeth without even realizing that they are learning!”

Some of the messages highlighted in the show include:

The Columbia Marionette Theater is currently accepting requests for shows. The performances are designed for large groups of students. There are a limited number of free shows offered annually on a first come first serve basis during the month of February. The cost of the show is $275 for locations within a 40-mile radius of Columbia. Add $25 for each 40 miles of travel outside of Columbia.

For more information on scheduling a show, contact the theater directly at (803) 252-7366 or via email at puppetgnomes@msn.com.

The Columbia Marionette Theater in collaboration with the SC Dental Association and through funding provided from MUSC James B. Edwards College of Dental Medicine through Grant #HRSA/Bureau of Health Professions (T12HP28882) as part of DHEC’s Division of Oral Health’s POWER Pee Dee Project, has produced videos for school-age children to share valuable information about oral health. To view or download the videos please enter the password you were provided. If you would like to request the password, please email Amanda McAlhany at mcalhaal@dhec.sc.gov.

The providers that are currently engaged in a partnership with DHEC to deliver these services for the 2021-2022 school year include: 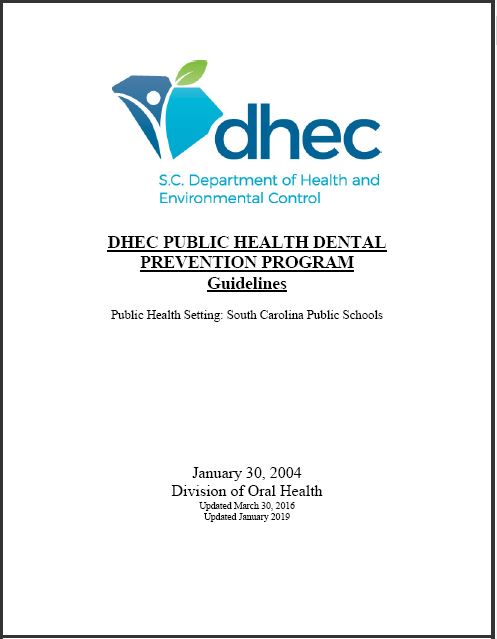 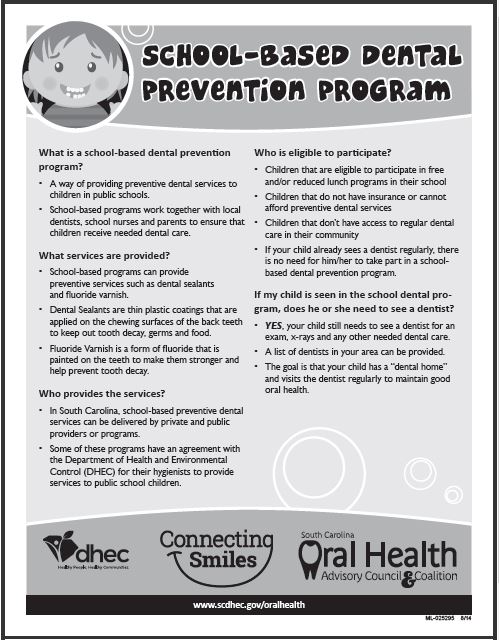 This supplemental curriculum guide contains standards-based lessons and activities designed for elementary students and can be accessed at http://scdhec.gov/sites/default/files/Library/ML-025253.pdf. The lessons are intended to engage children in hands-on, literacy-driven activities that teach them how to take care of their teeth and help them understand why it is important to do so. The booklet also reinforces the importance of choosing healthy foods and encourages students to keep their smiles safe and injury free. The guide is divided into two sections that include appropriate material for Grades 1-2 and Grades 3-5 as well as take home information for parents.

The Connecting Smiles initiative aims to improve oral health of the citizens of South Carolina by strengthening the linkage between individuals, community-based programs and medical and dental providers.